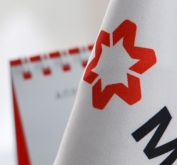 Metinvest B.V., the parent company of a vertically integrated group of steel and mining companies (jointly referred to as “Metinvest” or “the Group”), today announces its operational results for the second quarter and the first six months ended 30 June 2017.

In 2Q 2017, hot metal output increased by 2% q-o-q to 2,025 kt amid a surge in production at Ilyich Steel, which offset a decrease at Yenakiieve Steel and Azovstal. Ilyich Steel boosted its hot metal output by 296 kt in 2Q 2017, compared with low production in 1Q 2017 due to a scheduled major overhaul of blast furnace no. 3 for seven days and irregular coke deliveries caused by unstable operations at Avdiivka Coke. Yenakiieve Steel’s hot metal output declined by 247 kt due to the shutdown of blast furnaces in February amid a rail blockade in the zone between the territory controlled by Ukraine and the non-controlled area, and the subsequent loss of control over the enterprise from 15 March 2017. In 2Q 2017, Azovstal’s hot metal output decreased by 8 kt as a result of a scheduled major overhaul of blast furnaces nos. 4 and 5.

In 1H 2017, the Group’s hot metal output dropped by 6% y-o-y to 4,008 kt, driven by a fall of 654 kt at Yenakiieve Steel, which was partly compensated by increases of 346 kt and 36 kt at Azovstal and Ilyich Steel, respectively. The decline at Yenakiieve Steel was due to the reasons mentioned above. The rise at Azovstal was caused by the re-launch of blast furnace no. 4 in February 2016 following a lengthy major overhaul.

In 1H 2017, the Group’s steel output declined by 6% y-o-y to 3,923 kt amid a decrease of 682 kt at Yenakiieve Steel, which was partly offset by an increase of 357 kt at Azovstal and 61 kt at Ilyich Steel. The rise at Azovstal was due to greater hot metal output, while that at Ilyich Steel was the result of higher hot metal output and its redistribution from merchant pig iron production to steelmaking in 1Q 2017. The decline at Yenakiieve Steel was caused by the reasons mentioned above.

In 2Q 2017, the Group’s output of merchant semi-finished products rose by 55% q-o-q to 705 kt. This was due to an increase in merchant pig iron output of 264 kt amid greater production of hot metal at Ilyich Steel and Azovstal. Output of merchant slabs remained unchanged q-o-q and amounted to 303 kt. Merchant billet production dropped by 15 kt due to the shutdown of Yenakiieve Steel for the abovementioned reasons.

In 1H 2017, output of merchant semi-finished products increased by 12% y-o-y to 1,159 kt due to rises in output of slabs and merchant pig iron of 252 kt and 49 kt, respectively. The decrease of 173 kt in square billet production was caused by the abovementioned shutdown of Yenakiieve Steel. The rise in output of merchant pig iron at Ilyich Steel and Azovstal was in response to a favourable market trend. Merchant slab production climbed by 252 kt, as Azovstal boosted its output given the market rally.

In 2Q 2017, output of flat products rose by 10 kt q-o-q to 1,192 kt due to increases of 45 kt at Ilyich Steel and 10 kt at the European re-rollers amid a revival in demand. This offset a decrease of 45 kt at Azovstal, caused by a redistribution of orders for production at Ilyich Steel.

In 2Q 2017, output of long products dropped by 194 kt q-o-q to 161 kt, driven by a slump of 198 kt at Yenakiieve Steel due to the abovementioned reasons. In addition, Promet Steel reduced its output by 13 kt due to a lack of square billets from Yenakiieve Steel. This was slightly offset by an increase of 17 kt in Azovstal’s production.

In 2Q 2017, rail output decreased by 9 kt q-o-q as a result of a drop in orders from Ukrainian State Railways.

Output of tubular products rose by 7 kt q-o-q due to an increase in production of other pipes at Ilyich Steel. At the same time, output of large-diameter pipes at Khartsyzk Pipe stopped following the loss of control over the enterprise from 15 March 2017.

Long product output dropped by 393 kt y-o-y to 516 kt following the shutdown of Yenakiieve Steel (331 kt) due to the aforementioned reasons. This caused a slump in output at Promet Steel (105 kt) amid a lack of billet deliveries from Yenakiieve Steel for re-rolling, which was partly compensated by higher output of long products at Azovstal (43 kt).

Output of tubular products rose by 26 kt y-o-y, as Ilyich Steel boosted production of other pipes due to an increase in capacity.

In 1H 2017, coke output fell by 3% y-o-y to 2,131 kt. This was driven by a production decline of 157 kt at Avdiivka Coke, which was partly compensated by increases of 70 kt at Azovstal and 28 kt at Zaporizhia Coke. The rise at Azovstal stemmed from more stable coal deliveries, while Zaporizhia Coke was able to increase its production due to the commissioning of coking chambers of coke oven battery no. 2.

In 1H 2017, the Group’s output of iron ore concentrate dropped by 14% y-o-y to 13,649 kt, amid a drive to catch up with overburden removal work. Merchant concentrate production totalled 5,163 kt, down 19% y-o-y, due to lower overall output of concentrate. Merchant pellet output dropped by 15% y-o-y to 2,588 kt, due to the cessation of shipments to certain customers in the non-controlled territory of Ukraine and a shift in pricing in favour of concentrate, which offered higher margins in February-April 2017.

In 2Q 2017, the Group’s coal concentrate production totalled 654 kt, down 17% q-o-q. Output at Krasnodon Coal’s mines fell by 129 kt due to the rail blockade between Ukrainian territory and the non-controlled area, as well as the loss of control over the enterprise from March 2017. Coal concentrate output at United Coal’s mines decreased by 9 kt.

In 1H 2017, Metinvest’s coal concentrate production dropped by 8% y-o-y to 1,447 kt. Coal mining at Krasnodon Coal decreased by 193 kt due to the abovementioned reasons. This was partly compensated by an increase in production of 60 kt at United Coal to cover intragroup needs, resulting from a rise of 131 kt at the Wellmore mines, 11 kt at Carter Roag and 18 kt at Pocahontas. Output at the Affinity mine dropped by 100 kt as a result of changes in geological conditions.

Rail products include light and heavy rails and rail fasteners

METINVEST GROUP is a vertically integrated group of steel and mining companies that manages every link of the value chain, from mining and processing iron ore and coal to making and selling semi-finished and finished steel products. It comprises steel and mining production facilities located in Ukraine, Europeand the US, as well as a sales network covering all key global markets. The Group has two operating segments, Metallurgical and Mining. Its strategic vision is to become a leading vertically integrated steel producer in Europe, delivering sustainable growth and profitability resilient to business cycles and providing investors with returns above the industry benchmarks. For the first quarter ended 31 March 2017, the Group reported revenues of US$1.9 bn and an EBITDA margin of 22%.